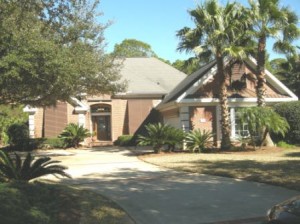 COBRA Zone: The term “COBRA” stands for CBRA or “Coastal Barrier Resources Act”. COBRA was intended to discourage development on coastal barriers. Coastal barriers are areas that naturally protect inland properties by acting as buffers. These coastal barriers are determined by FEMA and are found on the oceans, Great Lakes and other locations, such as bays.  If a property is in a COBRA zone, unless it was built before 1982 and meets other criteria, National Flood Insurance will not be available.  There are several subdivisions along the Emerald Coast of Florida that are in COBRA zones, including Kelly Plantation.

National Flood Insurance: NFIP, or the National Flood Insurance Program has been been in existence since 1986.  The program offers significantly more affordable flood insurance policies than do private insurers.  NFIP requires that any purchaser of a home in a high-flood risk area who obtains a federally regulated mortgage, must get flood insurance.

The Kelly Plantation challenge: Homes in Kelly Plantation, (COBRA zone), that are also in a flood zone with high flood risk, for example the AE flood zone, where the buyer or homeowner obtains a federally regulated mortgage, are required to have flood insurance. A Federal Flood Insurance Program policy would not be allowed due to the COBRA zone regulations. The only alternative would be to get private flood insurance. The quotes for private flood insurance in this situation are about $14,000 a year. (I am not making that up!) Most buyers cannot justify or afford to pay a premium that would cost $1166 per month or more.

Solution: How to Buy or Sell a Home in Kelly Plantation in a COBRA and High Risk Flood Zone

1. Have the homeowner obtain a FEMA Letter of Map Amendment (LOMA) or Letter of Map Revision Based on Fill (LOMR-F) if he feels the property was incorrectly mapped and/or fill was used to raise the property so that it is higher than the FEMA Base Flood Elevation. A surveyor who has experience with the LOMA process is recommended in these cases.2. Pay cash for the property. This eliminates the requirement of flood insurance.

2. Pay cash for the property, which will eliminate the flood insurance requirement.

3. Owner financing. This is how I sold this Kelly Plantation home at 221 Matties Way.

This home  at 1694 Valparaiso Blvd., in the Pinecrest subdvision in Niceville Florida, has just been approved for short sale! Lender: …

Even an uncontested divorce can be expensive when attorneys are involved. Divorce Docs, based near Destin Florida,…