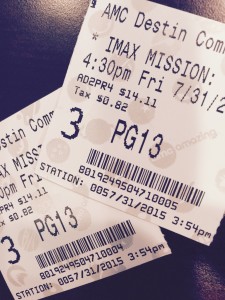 Friday night was “Date Night” in Destin, so my husband and I decided to go to an afternoon movie at Destin Commons then dinner.  Being huge “Mission Impossible” fans, we went to the opening showing of “Mission: Impossible Rogue Nation” at the IMAX at AMC Destin Commons 14.  I was thrilled after just 15 minutes, and could have left I was so happy! The movie rocked with non-stop action and incredible Tom Cruise stunts and snappiness. It was well-cast, with the new evil villain played by a very frightening Sean Harris that was so understated and quirky, I wouldn’t want to be alone with him.  Simon Pegg was a goofy foil to Tom Cruise and I also liked Jeremy Renner (would love to see him in another “Bourne”) and Alec Baldwin was perfect as a bit of a jerk!

After a delightful two hours of nail-biting, laughing and clinging to Hubby, we were ready for dinner. The idea to go out actually started a week earlier when some out-of-town colleagues of Randy’s wanted to go to dinner on a Friday night.  Most people visiting Destin in the summer or new to the area like to go anywhere on the water.  They find out very quickly that it’s not a good idea if you don’t have reservations.  We grudgingly went along but ended up aborting the mission after trying two different restaurants  (the new LuLu’s and Back Porch) with either too much chaos or a three-hour wait (you know when you see hoards of people sitting outside on a bench in 90 degrees reading menus before they get in?) We said we were going out alone the following week, with “reservations”, of course!  I started by polling my local friends on Facebook about their favorite Destin restaurants for a Friday night that took reservations.  They answered Marina Cafe, Vin’tij, Seagar’s, Camille’s at Crystal Beach, Ruth’s Chris, Bijoux, Beachwalk Cafe, Marlin Grill and Mimmo’s.  We ended up going to The Craft Bar.  I had liked it when I tried it for lunch a few weeks earlier. Come on, how many restaurants have “kale” as a side-dish? 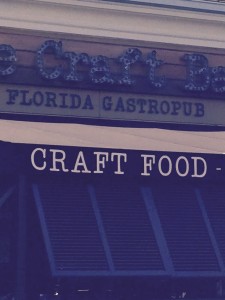 The Craft Bar bills itself as a “gastropub” with “chef-inspired” food.  It has the atmosphere of a simple, concrete and tables, late night bar. It’s dark. It’s loud. The music was great – it sounded like a live band playing, but it was just their pumped-up sound system.  It was packed.  Randy and I were lucky and got a low window seat.  We were both starving (hey, we’re not used to these late hours, it’s not like New York, ya know?), so we ordered the “the craft bar burger” with fries each. Tick tock. Tick tock. Almost one hour later, the food arrived. During the wait, the manager and server came over multiple times to assure us the food was coming in the next “minute”.  When I mentioned that Publix sushi, across the parking lot, was starting to look good, our dinner finally arrived. The burgers were indeed delicious, with a grill char like in your own back yard. The fries passed, too. They were thin and crunchy and plentiful.  To amend for the long wait, the manager waived the wine and ice tea charge. How nice! Recommended? I would say “yes”!

Today I am driving north across the Mid-Bay Bridge in Niceville Florida, when I see a full size tire…

In the Destin Florida real estate market, there are 3105 properties for sale— 935 single family homes,…

This Crystal Beach Destin Florida home at 98 Barracuda St., is on its way to Sold. Under contract…

Rulnick Realty announces that Jeff Corl has joined the company.  Jeff has been a Realtor® in the Destin Florida…